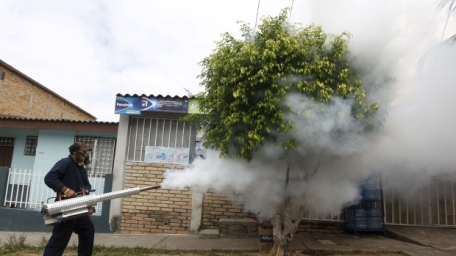 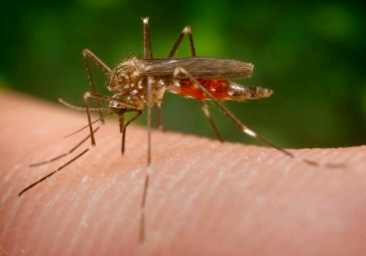 The first meeting of the Emergency Committee (EC) convened by the Director-General under the International Health Regulations (2005) (IHR 2005) regarding clusters of microcephaly cases and other neurologic disorders in some areas affected by Zika virus was held by teleconference on 1 February 2016, from 13:10 to 16:55 Central European Time.

The WHO Secretariat briefed the Committee on the clusters of microcephaly and Guillain-Barré Syndrome (GBS) that have been temporally associated with Zika virus transmission in some settings. The Committee was provided with additional data on the current understanding of the history of Zika virus, its spread, clinical presentation and epidemiology.

The Committee advised that the recent cluster of microcephaly cases and other neurologic disorders reported in Brazil, following a similar cluster in French Polynesia in 2014, constitutes a Public Health Emergency of International Concern (PHEIC).

Based on this information, the WHO Director-General declared a Public Health Emergency of International Concern (PHEIC) on 1 February 2016.

The Zika Virus was a scarcely known disease even in the final months of 2015. However, with the stunning epidemiological correlation that the Zika Virus may be linked to birth defects such as microcephaly (an abnormally small head) in children born to pregnant women infected with the disease, many countries in Latin American began raising warnings about the infection.  Brazil was one of the first countries to recognize the concerning association between the Zika Virus infection and babies with rare brain birth defects.  In October 2015, Dr. Vanessa Van Der Linden, a neurologist in the city of Recife, alerted state health officials about unusually high numbers of daily cases of microcephaly in babies of women who also reported mild viral symptoms and a rash during pregnancy.  Dr. Van Der Linden determined the infections during pregnancy  were too mild for more well known viral illnesses in the region such as dengue or chikungunya, and the link between Zika Virus and microcephaly began to emerge.  In 2013 and 2014, Brazil had approximately 150 cases of microcephaly, and as of January 2016, Brazil reports more than 4,100 cases.  Brazilian government officials suspect that the virus was introduced into the country during the 2014 Football (Soccer) World Cup games.

The virus was identified for the first time in 1947 in the Zika forest of Uganda in rhesus monkeys and then in 1952 in humans, and the virus has remained primarily in Africa except for sporadic outbreaks in Asia. In 2007, a major epidemic was reported on the island of Yap (Micronesia) when almost 75% of the population was infected.

The symptoms last for a few days to a week. Individuals should contact their physicians if they develop symptoms within 2 weeks of traveling to a country with known Zika Virus transmission for possible testing and evaluation.

Treatment is supportive care and includes:

Active Zika Virus transmission is currently located in multiple countries in Central America, South America, and the Caribbean (see map).  Women who are pregnant are strongly urged by the U.S. Centers for Disease Control (CDC) and the WHO to postpone travel to these regions. 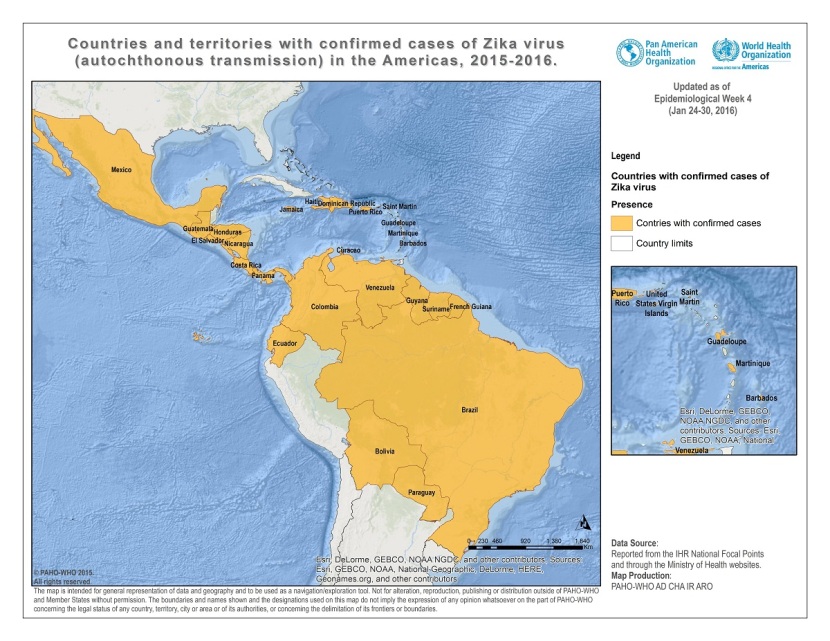 The US CDC has provided physicians with the following protocol for evaluating pregnant women who have signs and symptoms of Zika Virus and have travelled to a country with active disease transmission within the past 2 weeks:

The Committee provided the following advice to the Director-General to address the Zika Virus PHEIC:

As these clusters have occurred in areas newly infected with Zika virus, and in keeping with good public health practice and the absence of another explanation for these clusters, the Committee highlights the importance of aggressive measures to reduce infection with Zika virus, particularly among pregnant women and women of childbearing age.