This is not a discussion about the 2nd Amendment or about the “right to bear arms.”  This is an analysis of the public health impact of violence and scientific strategies to reduce injuries and deaths from firearms.

Georges Benjamin, the Executive Director of the American Public Health Association, believes we have a gun violence “epidemic.” With over 30,000 people in America dying annually from firearm-related violence, he believes “we should track it, find the root causes, use science to find research gaps, create policy solutions and use mass public education campaigns to eradicate the threat.” He argues that scientific methods were used in the face of increasing deaths from automobile accidents to great success and that scientists should be allowed to study gun violence just as they did for Ebola.

This video from Vox describes the current state of gun violence, emphasizing that though mass shootings are the most publicized events, they are not the most common type of firearm-related violence that our country faces.

Dr. Benjamin isn’t the only one. In an interview with the Washington Post last October, Dr. Daniel Webster of the Johns Hopkins Center for Gun Policy and Research stated:

What explains the difference of two or more decades [of life expectancy] between a male who lives in West Baltimore, in a disadvantaged area, versus Roland Park in the northwest part of Baltimore, a really affluent area? Well, there’s probably a number of things. But one of the biggest things that we find is risk of dying by gunshot. It just affects the basic things we care about in public health – the mortality, the life expectancy, morbidity, mental health. It affects all of those things in pretty profound ways.

For instance, what have we learned from the dramatic success story of how we’ve reduced mortality from motor vehicle crashes? There are a number of things we did that are transferable to the problem of gun violence. Both of those problem affect young people. On the driving side, we raised standards for driving when you’re young; we could raise standards for owning a gun, particularly when you’re young. We learned that you could design cars to be safe. Well, we could do the same with guns and save some lives…That’s where I think the real value is, is that it opens you to having a fuller understanding of the problem and what you can do to solve it.

So why aren’t we treating gun violence the same as we did for automobiles? It all comes down to money. Since 1996 researchers have been unable to receive funding for studies related to gun violence due to wording in a Congressional Appropriations Bill stating that “None of the funds made available for injury prevention and control at the Centers for Disease Control and Prevention may be used to advocate or promote gun control.”

Multiple physician advocacy groups have spoken in favor of repealing the block in funding, with a group of physicians from the group Doctors for Change lobbying on Capitol Hill the day before the deadly shooting in San Bernadino. By allowing funding for gun-related research, Rush Holt, the CEO for the American Association for the Advancement of Science, believes that technological advancements can be made to help make guns safer. “There is a role for researchers in developing technology for safer guns that can be fired only by authorized users.” In April 2015 the American Academy of Family Physicians, American Academy of Pediatrics, American College of Emergency Physicians, American Congress of Obstetricians and Gynecologists, American College of Physicians, American College of Surgeons, and American Psychiatric Association, American Public Health Association and the American Bar Association came together in an unprecedented “Call to Action.” In a statement published in the Annals of Internal Medicine, the group advocated for increased background checks for those purchasing firearms, an end to gag laws which prevent physicians inquiring about the safety of guns kept in houses with children and those at risk for suicidality, an increase in resources to treat mental illness and substance abuse, measures to balance safety and privacy with respect to reporting laws for those with mental illness who wish to purchase firearms, a ban on private ownership of assault weapons and an end to the ban on research funding.

However some argue with the premise that gun violence is a “public health” problem.

“I remain deeply skeptical of any attempts to frame important public policy debates as also ‘public health’ issues, especially when it concerns a long-running political controversy,” says Hsieh, who writes on health care policy from a free-market perspective for Forbes.com. “Pretty much any public policy issue will ultimately have some sort of effects on the lives and well-being of Americans – but that doesn’t mean they should all be considered topics of ‘public health'”. – Dr. Paul Hsieh, co-founder of Freedom and Individual Rights in Medicine

Despite the dearth in funds, some have still managed to find a way to apply scientific methods to the problem of gun violence. In 2004 the National Institute of Health held a State-of-the-Science Conference on Prevention Violence and Related Health-Risking Social Behaviors in Adolescents. In a Consensus statement following the conference, one among many of the recommendations listed was that trauma centers and emergency rooms may provide opportunities for intervention before escalations of violence. The theory being that the time after an individual is sent to the hospital for a violence-inflicted injury can be a ‘teachable moment’ – on in which an intervention may be successful in preventing the individual from retaliating or re-engaging in violence activity. In 2008, Cheng et al published a study investigating an intervention in children ages 10-15 who were seen in the emergency room after receiving an injury secondary to violence inflicted by a peer. These children were assigned a ‘mentor’ who met with them for six sessions Additionally, their parents received 3 ‘health education’ visits. The authors found that even with just six visits these children demonstrated a decrease in misdemeanor activity, youth-reported aggression and an increase in self-efficacy.

In 2014, Juillard and a team from UCSF wrote about their Wrap Around Program which provided one-on-one case management and resources on mental health, employment, education, housing, court advocacy and tattoo removal to victims of violent crimes. They noted that the strongest risk factor for violence injury was previous violent injury, and they created a Violence Intervention Program (VIP) to take advantage of the ‘teachable moment’. The team found that with their VIP, the recidivism rate (rate of returning to the emergency room after a violence-induced injury) decreased from 16% to 4.5% and ended up saving the hospital 1/2 a million dollars per year. A similar program in Maryland found that if ‘violence intervention specialists’ followed up with patients after discharge, they were 83% less likely to return to the emergency room after a violent event.

In 1994 the Youth ALIVE! program partnered with a hospital in Oakland, California to create the Caught in the Crossfire program. Since then more than 30 other programs have been founded and together have formed the National Network of Hospital Based Violence Intervention Programs. In 2000, the Chicago CeaseFire program was founded with the goal of reducing gun related violence in Chicago.  In a 2014 evaluation investigators found that in communities where the program was implemented there was a 38.8% greater decrease in homicides, 1% greater decrease in total violent crimes and 15% greater decrease in non-fatal shootings compared to non-participating communities.  Since its founding, the program’s name has changed to CureViolence and its model has been implemented around the world. Cure Violence operates under the preface that gun violence is, “like an infection” and should be treated as such. 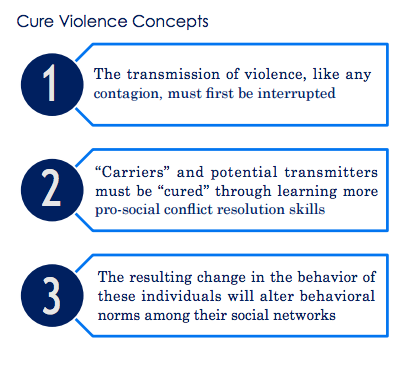 In New York City the program was implemented under the name Save Our Streets (SOS). In this program, outreach workers worked to “act as a role model and deliver the message of nonviolence to high-risk participants and assist them to think through the risks inherent in violence and possible alternatives to resolving conflicts.” High-risk participants were classified as such if they fulfilled at least four of the following characteristics: 16-25 years old, recently released from prison, recent victim of a shooting, major player in a street organization, active in violence street organization, history of violent crimes or weapons owners. Through this program the ‘Violence Interrupters’ were able to successfully resolve 60% of conflicts. A similar program in Baltimore found that in 112 months their efforts resulted in 5.4 fewer homicides and 34.6 fewer nonfatal shootings.

The CureViolence and VIP programs are one approach to the problem of gun violence. Temple University Hospital has recently announced another through the start of its FIGHTING CHANCE program which will teach community members to provide first aid to gunshot victims.

In February 2016,the United States Agency for International Development published a report entitled “What Works in Reducing Community Violence: A Meta-Review and Field Study for the Northern Triangle” to assess strategies that could be used to address violence in El Salvador, Honduras, and Guatemala. The authors of this review analyzed over a thousand articles (many done in the United States) pertaining to violence intervention in the criminal justice and public health literature. They divided interventions into three categories: place, people, and behavior based.

The place-based interventions which received ‘strong’ recommendations with ‘modest’ impact were hot spot policing, where policing is concentrated on a small geographic region with a high crime rate, and disorder policing, or broken-window policing, which focuses on addressing physical and social disorder in neighborhoods. People-based interventions with ‘strong’ recommendations and which generate ‘strong’ impact included cognitive behavior therapy which employs a risk/needs/responsivity framework. For behavior-based interventions, drug courts and treatment were found to have a strong impact on recidivism rates, comprehensive gun violence reduction had a strong impact on rates of crime and violence. Interestingly, there was strong evidence that gun buybacks had no effect, modest evidence that gang reduction also had no effect, and moderate evidence that drug enforcement actually had a negative effect on violence.

Using these data the report highlights the qualities of effective initiatives.

Gun control is highly political, with strong feelings on both sides of the issue. The fact remains that in our country an unacceptably high number of individuals die each year from firearm violence. By addressing this as a “public health” issue, researchers will be able to employ scientific methods to produce strong evidence that can be used to inform effective policy solutions. Even in this politicized climate, some programs have been successful in doing just that. With increased funding, we can hopefully do even more.