Close your eyes and picture a heroin addict. Chances are you’re thinking of a young, uneducated, low-income youth with a significant criminal background. The face of heroin in America is changing and likely doesn’t look like whom you would expect. Communities across the nation are facing a staggering epidemic of heroin abuse. New York City had more deaths from heroin overdose in 2014 than in any year since 2003, in 2013 420 of 782 fatal drug overdoses in the city were due to this increasingly popular drug. 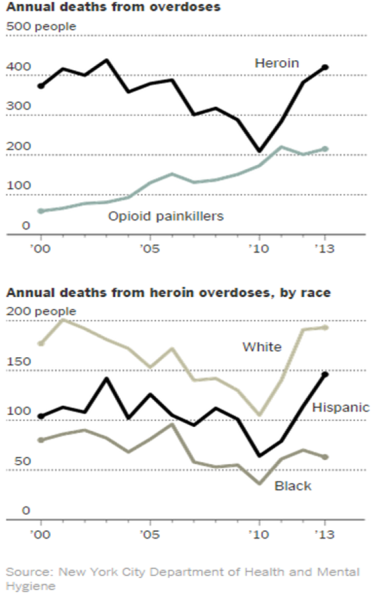 The CDC reports that between 2010 and 2012 the overall death rate from heroin doubled in 28 states. In West Virginia, heroin deaths have tripled over the last five years. In fact, in nearly 50% of all states, 12 step programs for narcotics addicts are more popular than those for alcoholics. 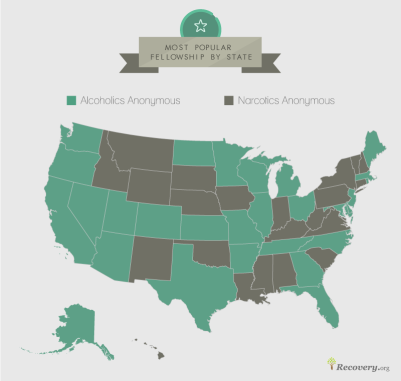 What’s driving this epidemic is the growing use and abuse of prescription opiates in this country. One study has shown that 1 in 5 American adults report being in pain everyday for at least three months at a time. The chronic pain patients are often prescribed opiate medications, which can be extremely addicting. In fact, the CDC reported that 75% of new heroin addicts had abused prescription pain killers before beginning to use heroin. This infographic put together by the Coalition Against Drug Abuse shows the rapid increase in opioid overdose. (click the link for more interactive infographics)

As these opiate prescription medications become more expensive and harder to get prescribed, however, people are turning to an much more accessible alternative: heroin. In 2011, there were  258,452 emergency department visits related to heroin use, representing 20% of all drug-related visits. Among heroin users, over 90% had witnessed a fellow user overdose. The following infographic was put together by heroin.net and is accessible here.

This increase in heroin, and other opioid, addiction has not gone unnoticed. The White House has published a National Drug Control Strategy, which addresses the issue on page 3 of 93.

A key part of the administration’s strategy is Overdose Prevention, and “supports the use of naloxone by public health and law enforcement professionals to prevent drug-related deaths.” Additionally, in a Webinar given in conjunction with the American College of Emergency Physicians, Michael Botticelli, acting Director of the Office of National Drug Control Policy stated that “because some victims are in circumstances which make obtaining or succeeding at treatment difficult[…]overdose education with naloxone may save a life and enable eventual participation in treatment.”

What is naloxone? Also known as narcan, this is a drug that has been used widely in hospitals and by paramedics in the setting of opiate overdose and works as an ‘instant withdrawal’, immediately counteracting the effects of the opiate. Naloxone is only effective against opiate drugs and cannot be used for overdoses involving cocaine or amphetamines for example. The FDA has also recently approved an auto injector which can verbalize commands and instructions to the user, much like public AEDs.

The World Health Organization has also voiced support for naloxone, stating that the drug ought to be made available to those individuals likely to witnesses an overdose, along with training in first response during these medical emergencies. In fact, it’s been on their list of “essential medications” since 1983. 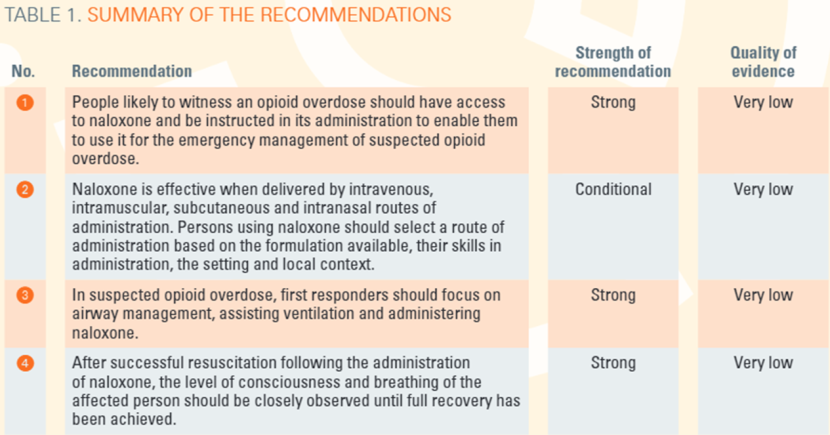 So what’s the problem? Opponents of naloxone believe the antidote will serve to promote heroin use, not curb it. And there is not a whole lot of high quality data, which WHO recognizes. Additionally, because the drug will likely be administered by an individual witnessing the overdose,not to the person it was prescribed to, the legality is questionable. 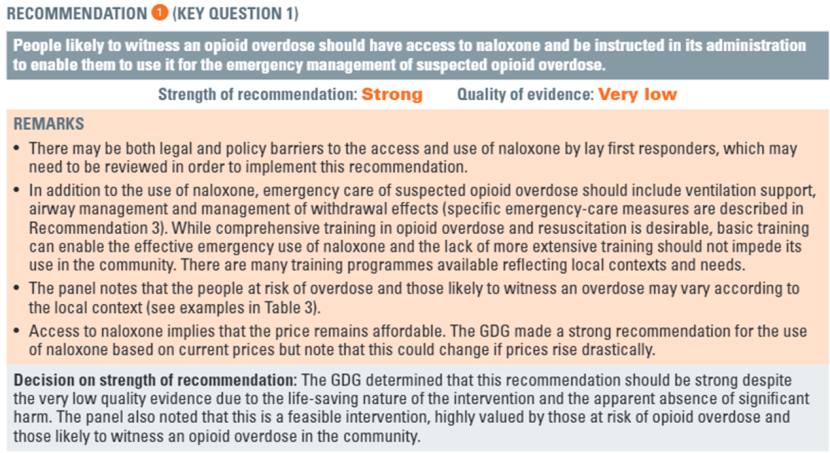 Nevertheless, programs in the United States and around the world have begun to distribute naloxone and provide training on its administration to the general public. One survey of programs in the United States showed that the distribution of nearly 50,000 naloxone kits and resulted in their utilization in over 10,000 overdoses. Police Departments across the country have also begun to stock the drug and train their officers in its administration, starting with the Quincy, MA Police Department in 2010. A list of all law enforcement agencies carrying naloxone can be found here. Many state and local governments have also begun to amend laws to make naloxone more available. A list of all legal interventions to reduce overdose mortality can be found here in a report put together by the Network for Public Health Law.

While perhaps not gold-standard trials, there has been some research into the efficacy of naloxone kit distribution in reducing overdose mortality. In 2008, the CDC found that 19 of 25 states, or 76%, with higher-than-median rates of overdose-related deaths, did not have community based programs which supplied naloxone. The same study published data on the growth of naloxone providing programs from 1996 to 2012. 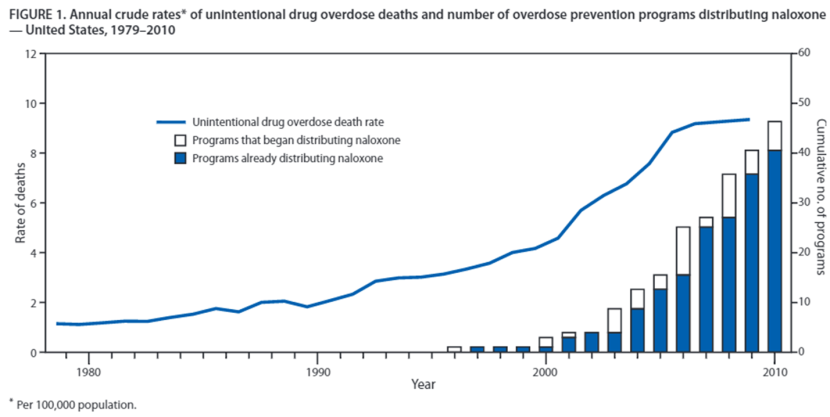 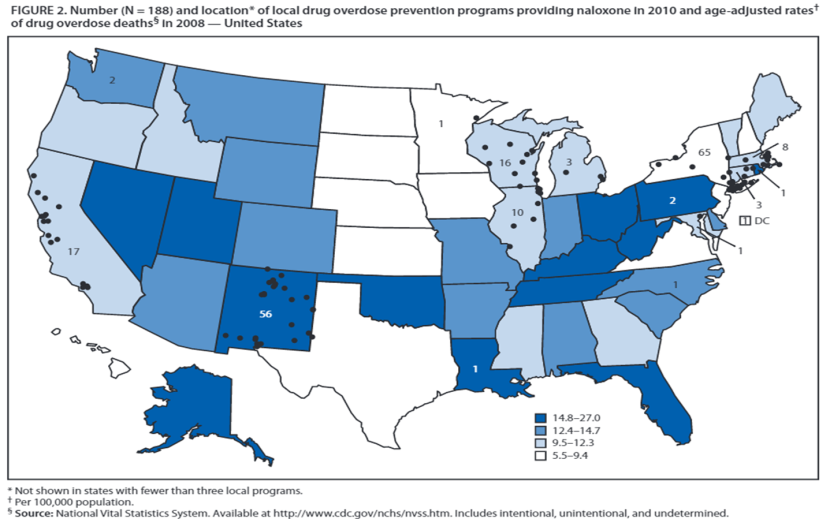 The Chicago Recovery Alliance has reported that by equipping 3,500 individuals with naloxone, 319 overdose reversals were achieved which were associated with a 20% decrease in overdoses the first year, and 10% decreases in the following two years. In a study of a program in Massachusetts, bystander naloxone administration was successful 98% of the time. Naloxone distribution was found to be successful in reducing overdose related deathseven when adjusted for demographics, utilization of addiction treatment or doctor shopping. In a 2014 review of the literature, naloxone was administered 1949 times, with success rates ranging from 83 to 100%.  The most common adverse events secondary to administration with vomiting or other symptoms of withdrawal, though some did report that a few of the naloxone providers subsequently faced problems with local law enforcement of EMTs regarding their possession of the drug. One study mentioned in the review demonstrated an increase in knowledge of overdose risk factors, signs and symptoms, response procedures and naloxone administration following a training course on the topic. A different study showed that 78% of participants retained that information for at least 3 months after such a course. Other studies also demonstrated that after naloxone training classes, participants were more likely to call 911, perform sternal rubs and CPR, and less likely to attempt other rescue attempts (such as cooling the patient, walking the patient, or injecting the patient with salt).

While naloxone distribution may not curb the use and abuse of heroin and prescription opioids, hopefully lives are being saved through the efforts of community based programs and law enforcement agencies. Unfortunately, many are facing difficulty attaining the drug as prescription prices have recently soared (in some areas increasing by over 50%) in the face of the increasing demand. In the mean time, steps must also be taken to find a solution to the nations pain and addiction epidemics as well.