Pertussis Epidemic affecting California and much of the US

Another day, another vaccine-preventable illness is on the rise. I described the current measles outbreak in an earlier post , and so that we do not run of out diseases to discuss, a new one has recently captured media attention. So far in 2014, 3,498 cases of Whooping Cough, or Pertussis, have been reported in California – more than all that were reported in 2013,  Nationally, 24% more cases have been reported than in January to April 2013. Pertussis outbreaks occur cyclically, peaking every 3-5 years, with the last peak in 2010. A vaccine-preventable disease, Pertussis infection begins as a cold-like illness associated with mild cough and fever. Within 1-2 weeks, however, the severe, characteristic cough begins and can continue for weeks. Infants, however, may not cough, but may suffer from dangerous fits of apnea, or pauses in breathing. In vaccinated children the symptoms’ duration and severity is lessened. The CDC’s website further describes the disease characteristics. 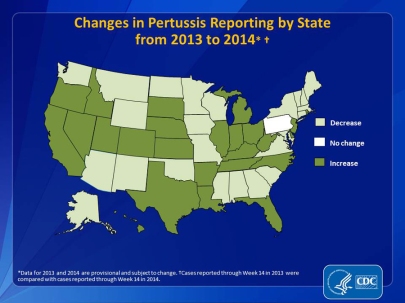 The vaccines aimed to fight pertussis, unlike those for diseases such as measles, do not offer lifetime immunity, meaning that all adults should receive a TDaP (Tetanus, Diphtheria, Pertussis) booster if they did not receive one after age 11. Dr. Ron Chapman, director of the California Department of Public Health, said in a statement that even having the illness does not provide lifelong protection, “However, vaccination is still the best defense against the potentially fatal diseases.”  Others have also called the potency of the vaccine into question with studies showing that 60% of pertussis samples contained mutations in the protein pertactin that make the virus less susceptible to the current vaccine. Nevertheless, it has not yet been shown that these mutations are driving the current epidemic, and vaccination is still advised.

In 1905, the landmark case of Jacobson v Massachusetts  created the foundation that allowed states to pass vaccination laws in an effort to fight smallpox. In 1922, the Supreme Court found school immunization requirements to be constitutional. This 2014 Congressional Research Service report further outlines the history of mandatory vaccinations. Just yesterday the New York Times broke the story of a federal judge in New York who upheld a school policy banning unimmunized children when another student has a vaccine preventable illness.

In 2009, Omer et al compiled a review on vaccine refusal. They describe a study by Smith et al that compared the characteristics of children who were unvaccinated and under-vaccinated from 1995-2001. While under-vaccinated children were more likely to be missing doses due to the health care system or sociodemographic characteristics, children who were completely unvaccinated were more likely to be male, white, of families with higher incomes, and to have a married mother with a college education. Parents who claimed vaccine exemptions were more likely to believe their children have a low susceptibility to the disease, that the severity of diseases was low, and that the safety and efficacy of vaccines were also low. These parents were also more likely to have healthcare providers who offered complementary or alternative health care and to utilize information off the Internet to receive medical information.

Glanz et al looked into parental refusal of pertussis vaccination in particular , and found that vaccine refusers had a 23-fold increased risk of developing the disease. Salmon et al similarly investigated vaccine refusal. I’ll let the charts below do the talking. 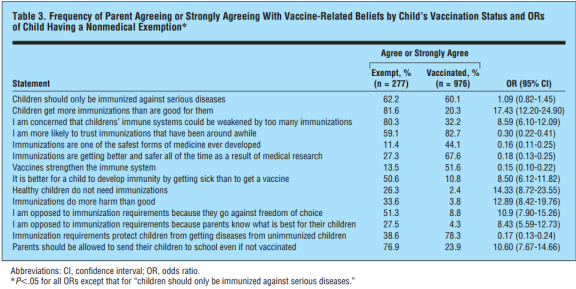 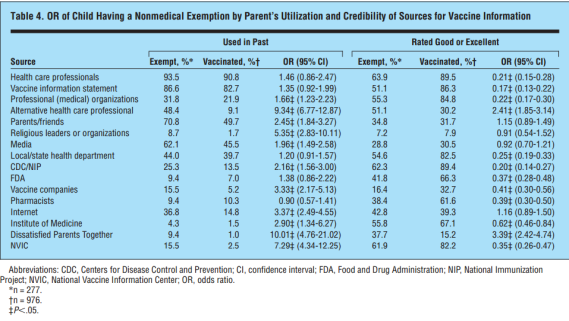 The Immunization Action Coalition has a whole database of similar articles. So how do you convince a parent in your clinic to vaccinate their child? The AAP offers these recommendations (and click the link to find responses to specific parental concerns as well!)

o Do you have any cultural, religious, or personal belief regarding immunization?

o Has your child or any child you know has a serious adverse event after an immunization?

o Do you have any vaccine safety concerns?

o What vaccine safety information can I provide?

• Be sure to listen to parents’ concerns and acknowledge them in a nonconfrontational manner. Allowing  parents to express their concerns will increase their willingness to listen to the pediatrician’s views.

• Promote partnerships with parents in decision-making and personalize these relationships. Provide the important information first. Make sure the parent understands the information. Clarify and reaffirm parents’ correct beliefs about immunization and modify misconceptions.

• Discuss the benefits of vaccines and the possibility of adverse events. Be open about what is known about immunizations and what is not known. Provide parents with Vaccine Information Statements, educational resources, and reliable Web sites. Personalize the information provided to parents based on cultural beliefs, vaccine concerns, and literacy level.

• Stress the number of lives saved by immunization, as a positive approach, rather than focusing on the number of deaths from not immunizing.

• Discuss state laws for school entry and the rationale for them. Some parents disagree with mandatory immunization and resist immunization because they believe their rights as parents are being taken away. Explain that vaccines benefit individual children and communities through herd immunity.

• Provider attitudes and beliefs about vaccine safety have been linked to vaccination coverage in preschool children. The majority of parents believe immunization is important and trust pediatricians as the most important source of immunization information.

If, after discussion about the benefits of vaccination and the risks of not vaccinating, the parent refuses, you should document the discussion and have the parent sign a waiver affirming the decision not to vaccinate.

Looking for more to read? Check out these articles on Mother Jones and the New Yorker which try to explain reasoning of those who deny vaccines and other matters of science, and Dylan Matthews explains the current anti-vaccination situation on Vox with a great video.

Have you found an effective method of persuasion to convince parents to vaccinate their children? Leave a comment below!