Tornadoes ripped through Arkansas, Oklahoma, and Iowa in the past month month, leaving 16 people dead and homes, businesses, and schools completely leveled. The event was classified as an EF-3 on the Enhanced Fujita Scale, which uses an assessment of the damages caused to classify the wind speed of a tornado. This storm comes only three years after one of the deadliest tornado events ever recorded killed 348 people in the South and Midwest, a region known as Tornado Alley.  Historically, the US is seeing an upward trend in annual tornadoes. 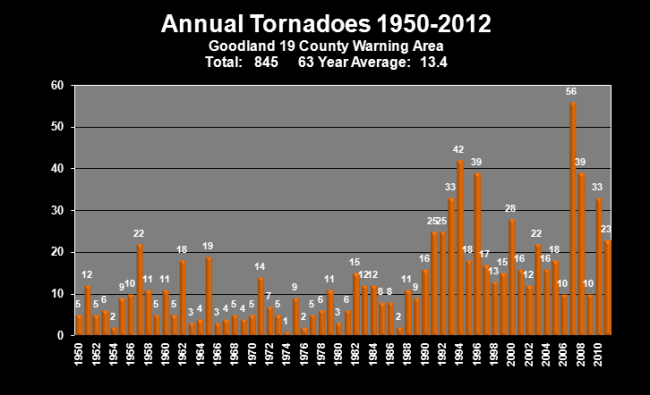 Tornadoes often develop from severe thunderstorms, but they can also arise from hurricanes.  Most have wind speeds less than 110 miles per hour, but an EF-5 tornado can reach wind speeds greater than 200 miles per hour, lifting animals, cars, and even mobile homes into the air.  Tornadoes cause an average of 60-65 fatalities and 1,500 injuries each year, and the National Oceanic & Atmospheric Administration (NOAA) provides a helpful Preparedness Guide for tornadoes and storms.  The National Weather Service issues a tornado watch when weather conditions promote tornado formations, and a tornado warning when a funnel cloud has been spotted or a Doppler radar detects a rotating thunderstorm known as a mesocyclone. The National Weather Service website can be accessed to monitor developing conditions, but in the case of compromised internet access, listen to NOAA radio for official warnings from the National Oceanic and Atmospheric Administration.

After the damage to property is surveyed and the health and safety of the population is ensured as best as possible, attention is turned to rebuilding and rehabilitation.

But as the debris is cleared and the towns affected by the tornado begin to work through their grief, another challenge lays ahead—one that is often overlooked following the chaos and devastation caused by natural disasters.  Mental health issues encountered after the emotional stress and uncertainty caused by natural disasters are a very real and significant public health problem.

Though in the immediate aftermath of a major disaster, these diagnoses might not be determined or the resources may not be available for intervention, a general framework for intervention should still be kept in mind.  Dr. Shah writes that the health professional or public health expert should consider the situation, phase, population, and patient (SPPP) when calibrating mental health interventions after events like the tornado in Arkansas:

After a natural disaster, affected populations will seek medical care for physiological complaints.  As health care professionals and public health professionals, we should not neglect this opportunity to screen for critical mental health issues.