In California, 2014 has been the year of historic & devastating wildfires. Over the past week, nearly 5,000 firefighters have battled ten wildfires that have swiftly moved across San Diego County resulting in 176,000 evacuation notices and nearly $20 million in damages. Early reports note that this wildfire season has been more devastating than previous ones with nearly twice as many fires as the average number of fires over the past five years. These fires have required at least two dozen water trucks and bulldozers, four air tankers and at least twenty-two military helicopters to be contained and have damaged an estimated 25,000 acres of land. 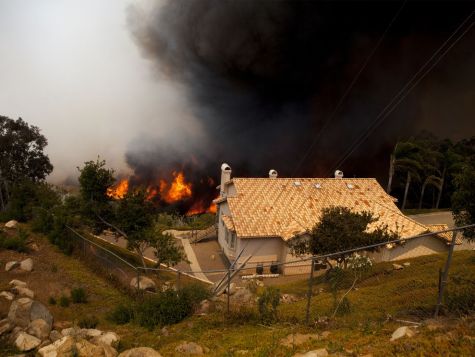 Climate change, months of droughts in California, and even possible arson have all contributed to what many are anticipating will be an exceptionally brutal wildfire season. Governor Jerry Brown of California has been vocal about the role that climate change has played in the worsening of the fires noting that, “humanity is on a collision course with nature, and we’re just going to have to adapt to it the best we can.”

For more up-to-date information about the California wildfires and the effort to contain them, visit http://www.fire.ca.gov/, which includes updated maps of current major wildfires

ReadyForWildfire.org has tips on how you and your family can be best prepared in case of a wildfire.  Their Action Plan checklist includes: